Opinions and policy positions evolve as people age and learn, but voters can be unforgiving of politicians who radically change their stances. In the 2016 election, Democratic nominee Hillary Clinton seems to have switched at least one position after coming under pressure from progressive supporters of primary challenger Senator Bernie Sanders of Vermont. In other instances she has moved to a different place on her own or just backpedaled in the face of vocal opposition.

For almost a decade and as late as 2010, Clinton opposed gay marriage but backed civil unions for gay and lesbian couples, as this video makes clear. In 2002, Clinton was asked by Chris Matthews of MSNBC, “Do you think New York State should recognize gay marriage?” Clinton’s answer: “No.” In 2004, as New York senator, she said: “I believe that marriage is not just a bond, but a sacred bond between a man and a woman.”

By 2013, she was saying: “I support marriage for lesbian and gay couples” personally and as a matter of policy. But in a 2014 interview with Terry Gross of NPR’s Fresh Air, she denied having changed her stance and suggested that Gross was trying to twist her words.

In 2002, explaining her vote for invading Iraq, Clinton said: “It is clear… that if left unchecked Saddam Hussein will continue to increase his capacity to wage chemical and biological warfare and will keep trying to develop nuclear weapons …This is probably the hardest decision I’ve ever had to make. Any vote that might lead to war should be hard, but I cast it with conviction.”
On Meet the Press in 2008, Clinton defended her vote authorizing the war, telling the late Tim Russert: “it is absolutely unfair to say that the vote as [former Senator and Defense Secretary] Chuck Hagel, who was one of the architects of the resolution, has said, was a vote for war. It was a vote to use the threat of force against Saddam Hussein, who never did anything without being made to do so.”

Last May, she changed her tune about the vote, saying: “I made it very clear that I made a mistake, plain and simple. And I have written about it in my book.” 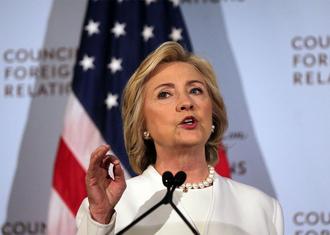 As secretary of state under President Obama, Clinton backed this ambitious 12-nation trade agreement, which was never concluded and is now in jeopardy. But Sanders – and Republican nominee Donald Trump – have denounced trade deals such as TPP as detrimental to American workers. Now Clinton opposes TPP, which she once called the “gold standard” of trade deals.

As first lady, Clinton was credited with helping her husband, President Bill Clinton, secure passage of NAFTA, a major trade deal that has since been criticized as a killer of U.S. manufacturing jobs. As a senator in 2004, she said: “I think on balance, NAFTA has been good for New York and America.” In her unsuccessful primary battle against then Senator Barack Obama in 2008, she said she was one of the voices within Bill Clinton’s administration “warning about NAFTA.”

In 2010, Secretary of State Clinton said the administration was “inclined” to support the building of the controversial pipeline, which would transport heavy crude oil from Canada to the U.S. She now flat-out opposes Keystone, saying “I never took a position on Keystone until I took a position on Keystone.” PolitiFacts calls that a “No Flip,” but others see it as a decision based on which way the political windsock was blowing.

In 1996, Hillary Clinton spoke in New Hampshire in support of a law signed by Bill Clinton, the 1994 Violent Crime Control and Law Enforcement Act, which has since been blamed in part for America having the highest mass incarceration rate in the world. She said: "We also have to have an organized effort against gangs. Just as in a previous generation we had an organized effort against the mob. We need to take these people on …They are often the kinds of kids that are called super predators — no conscience, no empathy. We can talk about why they ended up that way, but first, we have to bring them to heel." Clinton has been criticized by Bernie Sanders and most recently Republican National Chairman Reince Priebus for calling African-American youths “super predators.” Though she didn’t make a direct connection, Sanders said, “it was a racist term, and everyone knew it was a racist term.” Clinton has said she regrets using those words. Her website now says: “This mass incarceration epidemic has an explicit racial bias, as one in three black men can expect to go to prison in their lifetime. A significant number of those incarcerated are held for low-level, nonviolent offenses. We must end the era of mass incarceration.”

In 2014, Clinton discussed the influx of children from Central America illegally crossing into the U.S. with Christiane Amanpour of CNN. She said: “We have to send a clear message that just because your child gets across the border, that doesn’t mean your child gets to stay.” But in an MSNBC/Telemondo Town Hall in February, Jose Diaz-Balart asked if those children should be treated like a message. “Well,” Clinton said, “the children themselves need to be taken care of. They are children. They should be given every help that we can.”

Why the CIA is for Hillary Clinton