Trump would pursue ISIS in Syria, not Assad‌‌‎‍ 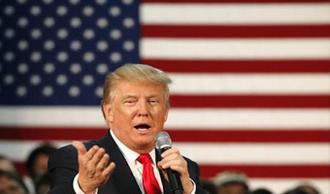 Presumptive Republican presidential nominee Donald Trump said he would not pursue military action against Syrian President Bashar al-Assad, but would wage a military campaign in that country only to combat the Islamic State.

Trump, speaking on MSNBC’s Morning Joe on Friday, reiterated his previous stances, that the war in Iraq and the limited military incursion into Libya were mistakes he opposed. Trump also has said he would not use the U.S. military to oust Assad’s regime, which has been locked in a five-year civil war with various elements within Syria opposed to his rule, including IS — also identified as Daesh, ISIS and ISIL.

“I would have stayed out of Syria and wouldn’t have fought so much for Assad, against Assad because I thought that was a whole thing,” Trump said. “You have Iran, which we made into a power. Iran now is a power. Because of us, because of some of the dumbest deals I have ever seen. So now you have Iran and you have Russia in favor of Assad. We’re supposed to fight the two of them. At the same time, we’re supposed to fight ISIS, who is fighting Assad.”

Asked whether he would be content to leave Assad, who is backed by Russia and Iran, in power, Trump said the United States has “bigger problems” than Assad.

Trump said the first interest for the United States should be to “knock the hell out of ISIS.”