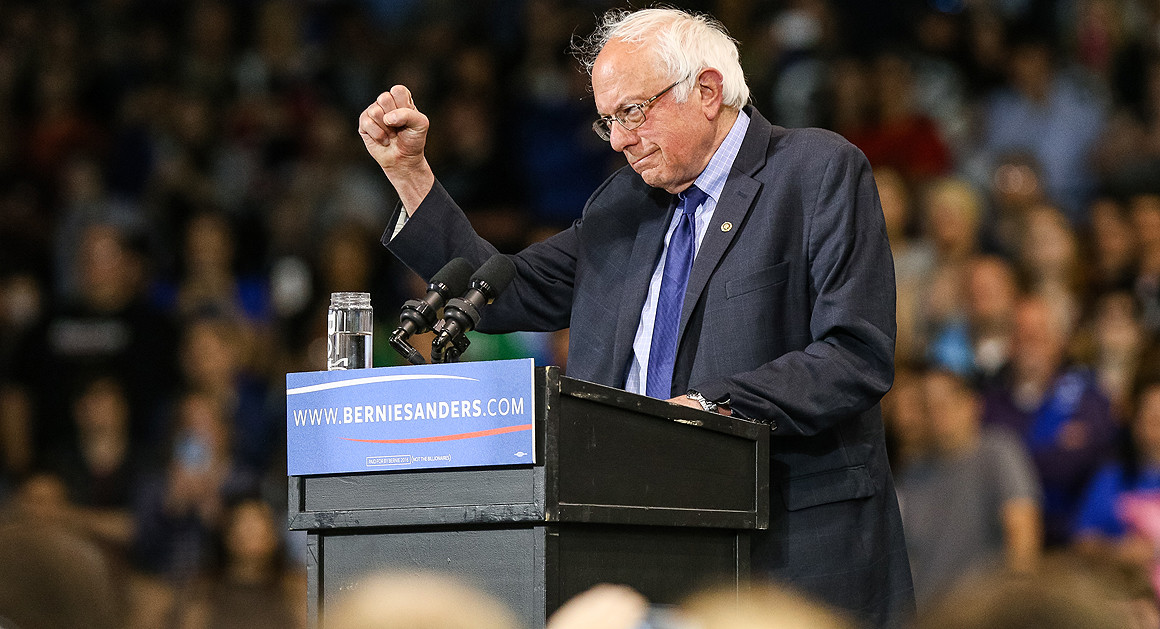 Bernie Sanders defeated Hillary Clinton in West Virginia's Democratic primary Tuesday, while Donald Trump, with no remaining challengers, claimed an easy victory there and in Nebraska among Republicans.

At a rally in Salem, Ore., following his win, Sanders, a Vermont senator, told supporters “it appears that we won a big, big victory in West Virginia.”

“West Virginia is a working-class state, and like many other states in this country, including Oregon, working people are hurting,” he said. “And what the people of West Virginia said tonight, and I believe the people of Oregon and Kentucky will say next week, is that we need an economy that works for all of us, not just the one percent.”

Oregon and Kentucky each hold Democratic primaries next Tuesday. Given the Democratic Party’s proportional allocation system, Sanders stood to only modestly boost his delegate total with his West Virginia win.

While Clinton’s loss will probably matter little in her battle with Sanders given her large overall delegate lead, it is a powerful reminder of her challenges in a general election match-up with Trump, the presumptive Republican nominee.

Clinton’s performance in West Virginia — a state she won by a wide margin in the 2008 primaries — could point to problems with a critical voting bloc that supported her husband during the more economically prosperous 1990s.

These same voters now feel left behind as manufacturing jobs have disappeared and the coal industry has declined amid a shift to cleaner sources of energy.  Trump is vowing to bring coal and manufacturing jobs back to depressed pockets of Appalachia by slapping tariffs on China and reworking trade deals.

Alternatively, Clinton’s vision is to move these communities to a new generation of jobs, acknowledging a coal industry renaissance is not in the cards.

In a speech at a brewery in southeastern Ohio last week, Clinton said coal is still a part of the nation’s energy supply, but even big coal-consuming nations like China are starting to burn less. “No matter what some politicians tell you, these trends are here to stay,” she said in Athens, Ohio.

It’s not a message they seem to want to hear. Trump is ahead of Clinton by 27 points in West Virginia, according to a recent Public Policy Polling survey. His performance in West Virginia with white, working-class voters also explains why he’s picking up steam in more critical Midwestern swing states that Clinton has to carry in November.

Democrats have assumed Clinton would beat Trump in states like Ohio, Pennsylvania and Michigan, which voted twice for Barack Obama and are populated by the blue-collar, union households that have been the Democratic Party’s lifeblood for generations.

Yet a new Quinnipiac University Swing State Poll shows Clinton and Trump in a dead heat in two of them: Ohio and Pennsylvania.

In West Virginia, Clinton also suffered from her association with Obama, whose policies have accelerated the nation’s shift to greener sources of energy without providing a safety net for workers dependent on the coal industry, according to Sen. Joe Manchin, a Democrat who represents the state.

“It’s been very harmful to the Democratic Party in West Virginia,” Manchin told reporters during a recent Clinton campaign stop in Charleston.

“People are upset our state has changed,” he said, but “I would hope they look at the individual," he added of Clinton.

On Obama, he said: “I have not gotten nowhere near the understanding and attention and the compassion and concern than I have gotten from Bill and Hillary Clinton.”

Meanwhile, on the Republican side, Trump for the first time faced a cleared field in West Virginia and Nebraska (Democrats already held a caucus there in March) after his two remaining rivals, Ted Cruz and John Kasich, dropped out of the Republican race last week following Trump's win in the Indiana primary.

"I look forward to returning to West Virginia and Nebraska soon, and hope to win both states in the general election," Trump said in a statement Tuesday night.

Trump, who has already been declared the presumptive Republican presidential nominee by the party, was 169 delegates short of the 1,237 needed to officially clinch the nomination ahead of Tuesday's primaries.

Clinton is trying to cast Trump as a fraud whose rhetoric about helping lower-income Americans does not match his policies.

On Tuesday in Louisville, she said Trump “actually stood on a debate stage and argued that Americans are paid too much, not too little."

She said he also would scrap the federal minimum wage. “It’s troubling to me because if you’re going to grow the economy, it’s kind of obvious that you want people making money,” she said.

Sanders, who won last week's Indiana primary, is nevertheless vowing to fight her all the way to the finish line. During a rally in Sacramento on Monday, he pledged to “take the political revolution” all the way to the party’s July convention in Philadelphia.