Ted Cruz drops out of the Republican presidential race 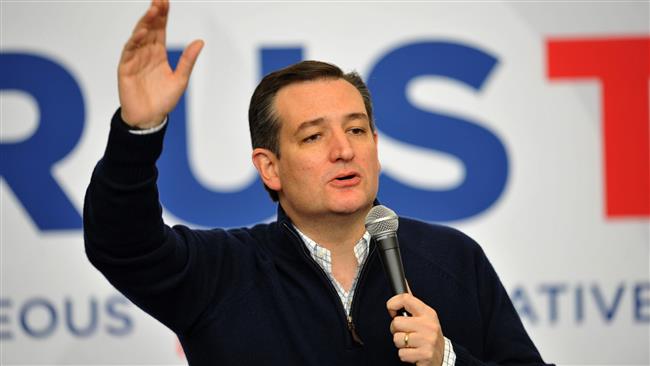 Ted Cruz, the insurgent Texan whose presidential campaign was fueled by disdain for Washington, dropped out of the 2016 race Tuesday night, removing the last major hurdle in Donald Trump’s quest to become the Republican nominee for president.

Cruz’s decision came after losing overwhelmingly to Trump in the Indiana primary, all but ensuring that real estate mogul will claim his party’s mantle at the Republican National Convention in July.

The exit comes after a series of desperate moves to keep his candidacy afloat in recent weeks, including naming former Hewlett-Packard CEO Carly Fiorina as his running mate in a bizarre announcement where Cruz spoke for a half hour and Fiorina sang to his young daughters.

In his last day on the campaign trail, Cruz unloaded on Trump, calling the businessman a”pathological liar” and a “narcissist” who was proud of being a “serial philanderer.” The attacks were reminiscent of the broadsides Sen. Marco Rubio launched against Trump in the waning days of his own presidential campaign — and a far cry from the lavish praise Cruz heaped on Trump for most of 2015, declaring, “I like Donald Trump.”

Cruz’s campaign hit its zenith in February when he resoundingly won the Iowa caucuses, due in large part to months of cultivating grassroots support in the state. But it soon became a roller-coaster ride of crushing losses in states where Cruz expected to do well, including South Carolina and Georgia, followed by resounding wins in his home state of Texas and Wisconsin. Cruz’s campaign used its grasp of the delegate process to beat Trump at state conventions where delegates were chosen, but it was not enough to overcome the businessman’s tally and strength with the electorate.

The fact that Cruz remained one of the last candidates standing in a once-crowded field would have been viewed as improbable when he entered the race 14 months earlier. Cruz, the first major candidate to enter the race, is a first-term senator best known for getting under the skin of his Senate colleagues and championing controversial tactics to block the implementation of the Affordable Care Act. He was painted as a long-shot underdog who was too religious and conservative to advance past the early nominating contests.

But his campaign had a meticulous strategy it planned to roll out over the year that followed, and it started working soon after he announced.

Cruz was immediately buoyed by impressive fundraising and the national platform that comes with announcing first. Groups backing the senator raised $31 million during the first week of his candidacy, and the campaign raked in $4 million.

The Texas Republican’s campaign employed a strategy of slowly introducing Cruz to a national audience while furiously working to shore up support with local activists and evangelical leaders in the first four voting states and the South, where the campaign expected Cruz to do well.

The campaign also talked about securing the support of delegates to the July convention almost as soon as it launched, envisioning Cruz in a head-to-head matchup with an establishment rival. The campaign sent emissaries to far-flung places such as Guam and the U.S. Virgin Islands to try to lock down delegate support over the summer.

It was a campaign that reflected its candidate: methodical, strategic and data-driven. Cruz’s campaign deployed a sophisticated data strategy that used psychographic information to appeal to the fears or hopes of potential voters.

Cruz touted his outsider status and contempt for what he called the “Washington cartel” of politicians and lobbyists in politics to get rich. He made the enmity of his Senate colleagues a point of pride, joking about needing a “food taster” in the Senate dining room. He made it clear that no other candidate would get to the right of him, particularly on the issue of immigration.

But then came Donald Trump.

Cruz made an early, conscious decision to buddy up to Trump, brushing aside the businessman’s caustic comments about Mexicans and praising his toughness on immigration.

The two men met at Trump Tower in July, where Cruz invited Trump to tour the U.S.-Mexico border with him. Trump went, but Cruz could not because of Senate votes. Cruz and Trump both appeared at a rally against the Iranian nuclear deal on Capitol Hill in September.

As rivals were punching at Trump during the fall and quickly seeing their poll numbers drop as the businessman swatted back at them with insults, Cruz lavished praise on his rival for the nomination.

Cruz also tacked sharply to the right in order to compete with Trump’s rhetoric. Cruz’s immigration proposals grew tougher the longer Trump was in the race. He criticized Trump’s plan for mass deportation of illegal immigrants, then seemed to support it. He spoke of being weary of foreign intervention, but promised to “carpet bomb” the Islamic State to see if “sand can glow in the dark” there. He introduced a bill to bar refugees from Syria and other groups.

In December — as Cruz’s poll numbers were up nationally and in Iowa — he was caught on tape saying at a closed-door fundraiser that Trump may not have the judgment to be president. Cruz moved to smooth over the fracas, but Trump pounced. A few weeks later in January, Trump questioned whether Cruz, who was born in Canada, is eligible to be president.

Cruz then went on an offensive blitz against the businessman, assailing him for supporting partial-birth abortion and bankrolling Democratic candidates. It seemed to work, with Cruz beating Trump in the Iowa caucuses. But the momentum stopped in New Hampshire, where Trump won by big margins before marching to victories in South Carolina and Nevada.

Trump also upended Cruz’s plan to chalk up big wins in the South, an area the campaign saw as receptive to Cruz’s unyielding conservatism and his Christian faith. The campaign was hit with internal turmoil when Cruz fired his communications director, Rick Tyler, after Tyler posted on social media a video falsely purporting to show Sen. March Rubio disparaging the Bible. Some of Cruz’s most prominent backers openly questioned his campaign strategy.

Despite his other losses in the South, Cruz notched a big win in his home state that offered him a bonanza of delegates and kept his candidacy alive. A win in Wisconsin in early April infused much-needed momentum into the flagging campaign.

Cruz’s team proved adept at mastering the arcane art of delegate allocation, regularly snatching delegate support from Trump at state conventions. But as the primary calendar moved to the Northeast — an area hostile to Cruz, who derided “New York values” on the campaign trail — Trump gained momentum while Cruz flagged.

Indiana, which Cruz’s team had identified - along with Nebraska and California - as a state where it thought it could do well, never warned to him. Cruz announced that he and Ohio Gov. John Kasich had an agreement where Cruz would campaign in Indiana and Kasich would not, instead focusing on Oregon and New Mexico. But the alliance turned rocky just hours after it was announced when Kasich refused to tell his supporters to vote for Cruz. The Texas Republican later said that there was no alliance, to which Kasich’s chief strategist tweeted, “I can’t stand liars.”

Cruz laced into Trump across the state, criticizing the endorsement he received from boxer Mike Tyson, who served time in prison in Indiana on a rape conviction, and decrying Trump as an insecure bully. The Fiorina announcement, meant to revive Cruz’s flagging candidacy in the state, gave it no discernable boost. The two barnstormed around the state, where Cruz faced less than enthusiastic crowds, and confronted a pro-Trump protester in Marion.

Cruz said of Trump, “This man is lying to you and he’s taking advantage of you.”

The man accused Cruz of lying, and said: “You’ll find out tomorrow. Indiana don’t want you.”